Witness to History 79 Years Ago ~ 52 Ancestors

This week's theme is Witness to History.

Sunday, December 7, 1941, 79 years ago, was the "date which will live in infamy," a phrase President Roosevelt used in the speech he gave to Congress on December 8, 1941.

The New York Times front page had a large headline and was full of stories about what had happened in Pearl Harbor the prior morning. 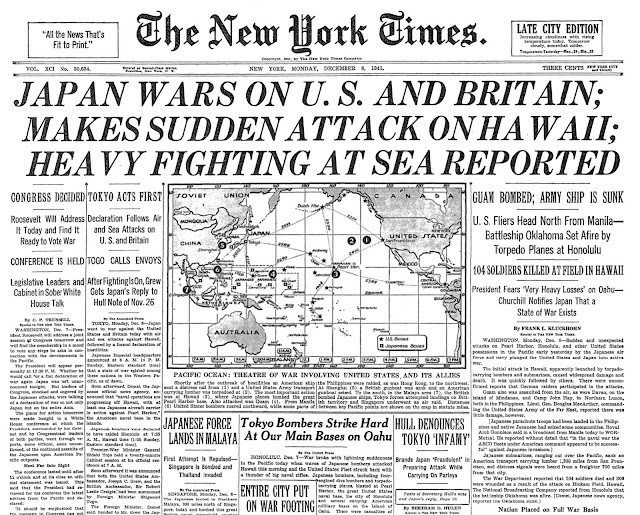 Page 27 of that newspaper was the social page with several wedding and engagement announcements. At the bottom of the page are listings of additional "social activities," including the notation that:

"Mr. and Mrs. Edgar C. Rust of Boston are expected today at the St. Regis."

It's interesting to discover that the day after the bombing of Pearl Harbor, my grandmother (Elizabeth Adsit) and her husband were traveling to New York City. It makes me wonder where they were when they heard the news and what they thought of that news.

(Just for fun, search for the St. Regis Hotel; it's quite luxurious and has quite a history!)

As I've written before, FDR was a Harvard classmate of my step-grandfather and hosted his class of 1904 classmates at the White House in 1934.