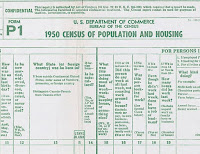 Finding my dad in the recently released 1950 U.S. Census was a challenge, as he wasn't living where I thought he would be living.

He was in Brookline, Massachusetts, at 156 Thornton Road, which is about as close to the border of the Boston neighborhood of West Roxbury as you can get. The red line on the enumeration district (ED) map below represents the town/city line for Brookline and West Roxbury.

The map suggests that Thornton Road was quite new. Look closely at the lettering where the white arrow is pointing in ED 11-137 - it looks like it was added after the rest of the lettering on the map. 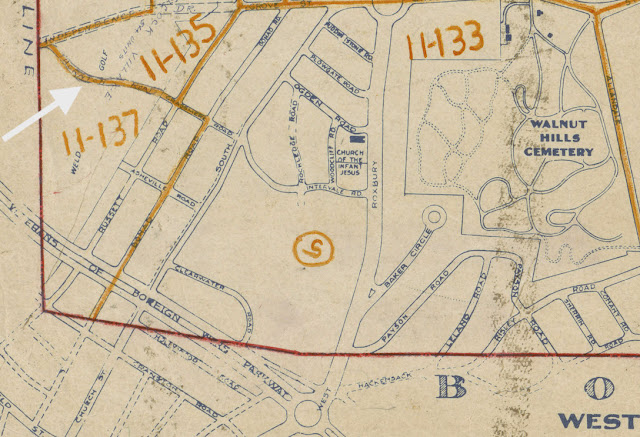 This was and still is known as the Hancock Village apartments. These low-rise brick apartment buildings were built in the late 1940s for returning WWII veterans. Some more history of this area can be found at the Preserve Brookline website.

Here is the census page where my dad is listed with his first wife, Jeannette. (Clicking on the image should enlarge it; they are on the last two lines in this cropped page.)

Sheet number 71 means that the enumerator had to return to his neighborhood to capture his information. (The ED has only 23 pages in total.) I found the street name of Thornton Road on page 2 of this ED, since the street was not named on page 71. His was the 17th household counted in this district.

Charles McA. Pyle was 25 and his wife was 22. He had worked 40 hours in the previous week as "Security Clearer" at a bank. My mother tells me that this meant that he was ensuring that securities (stocks, bonds) were being tracked properly and getting to the right place at the right time. (This, of course, was way before electronic stock transactions.) He continued to work for that investment bank for several decades, ultimately becoming a vice president.

Six residents on each census page were asked additional questions for sampling purposes. Lucky for me, Dad was one of these. This image is from the bottom of the census page.

He was living at the same address the year before. His answer to the question of "What is the highest grade of school that he has attended" was 1 year of college, which he completed. (See below for additional information about his education.)

Additionally, in 1949, he worked for 16 weeks and made $596 working as an employee for wages or salary. He also received $6,000 "from interest, dividends, veteran's allowances, pensions, rents, or other income." At the far right, it is noted that he served in WWII.

Dad and Jeannette likely moved here soon after their December 1948 wedding. He had completed one year of college at Princeton University (1942-43) before entering the U.S. Army Air Corps, where he served for over three years. When he returned home, he attended the Babson Institute of Business Training (now Babson College), graduating in the spring of 1949. I guess he didn't think of this as college since on the census, he reported having completed only one year of college.

I have a copy of his 1949 yearbook from The Babson Institute and if I had looked at it, I would have known his address.